Things to see and do on your visit 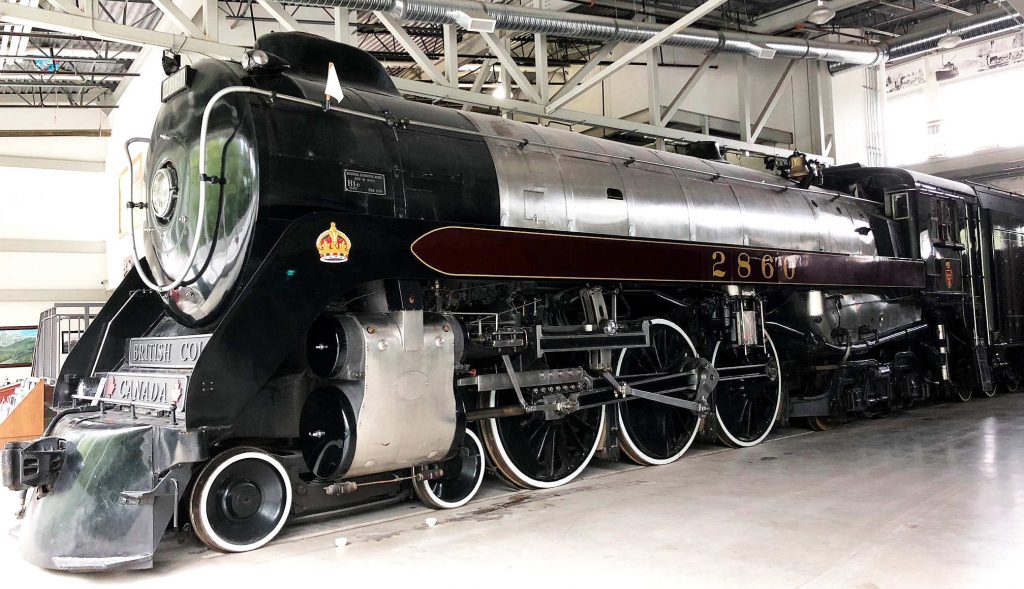 The Crown Jewel of our collection, 2860 is one of 65 ‘Hudson’ type 4-6-4 steam locomotives built for the CPR by Montreal Locomotive Works (MLW). This engine was finished in June, 1940.

See this magnificent locomotive inside the CN Roundhouse. Climb into the cab, ring the bell!

This series of engines was numbered 2800 to 2864, and the first was delivered in 1929. Starting with No. 2820, the Hudsons got the streamlining treatments so popular in the 1930’s. No. 2850 (now at Exporail near Montreal) was assigned to haul the Royal Train during the visit to Canada by King George VI and Queen Elizabeth in 1939. The locomotive performed flawlessly and impressed the King greatly. The CPR received permission to designate the streamlined Hudsons “Royal” and eventually each locomotive was equipped with a crown fastened to their running boards.

Five CPR Hudsons were saved, Nos. 2816, 2839, 2850, 2858 and 2860. Our No. 2860 was restored for a proposed Railway Museum in Vancouver. In 1974, the Province of British Columbia bought the locomotive for an excursion train. ‘The Royal Hudson’ ran on BC Rail track from North Vancouver to Squamish. In 2000, the province leased the engine to the district of Squamish for display and restoration at the West Coast Railway Heritage Park. 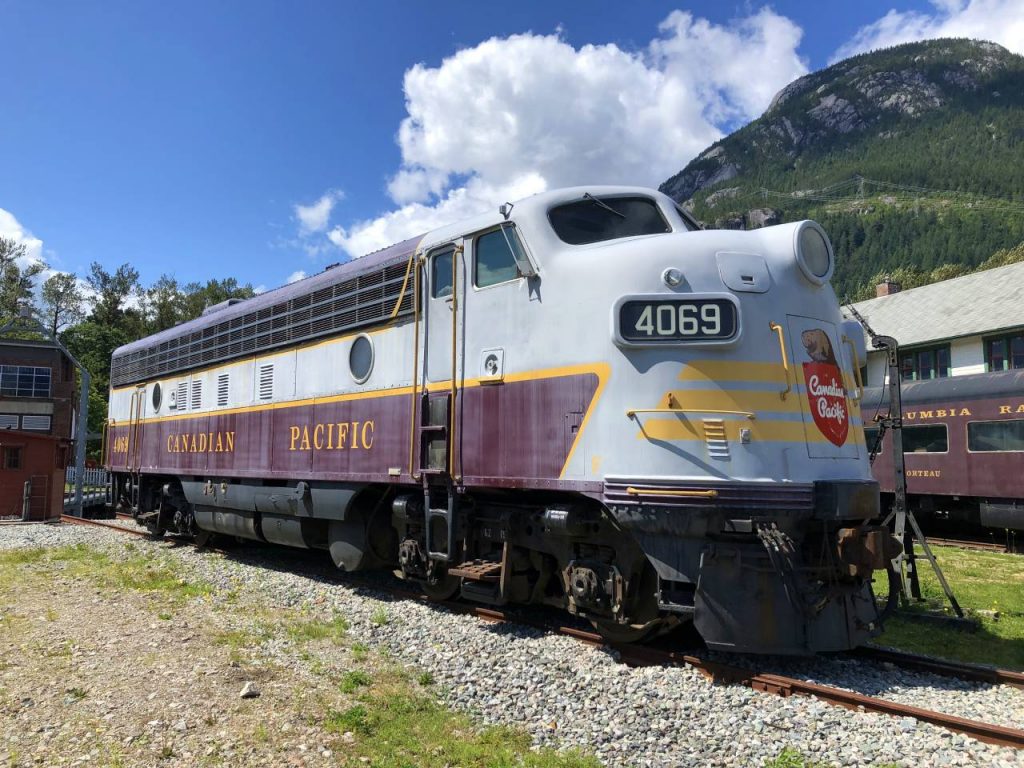 Our locomotive was built by General Motors in London, Ontario, developing 1500 HP, and delivered to the CPR on Jan. 29, 1952. Painted in classic CP maroon and gray, it’s used to head up our vintage CP passenger cars. It was renumbered to 1425 by the CPR to haul the new ‘Canadian’ in 1955. The locomotive helped usher in a new era of train travel in Canada. The Canadian ran from Montreal to Vancouver in 71 hours, 10 minutes.  This cut 16 hours from the schedule of the steam powered ‘Dominion’. CP 4069 is frequently spotted at the front of the Museum grounds for display and public access. Climb aboard and experience the view from the Engineer’s seat of this classic passenger diesel. 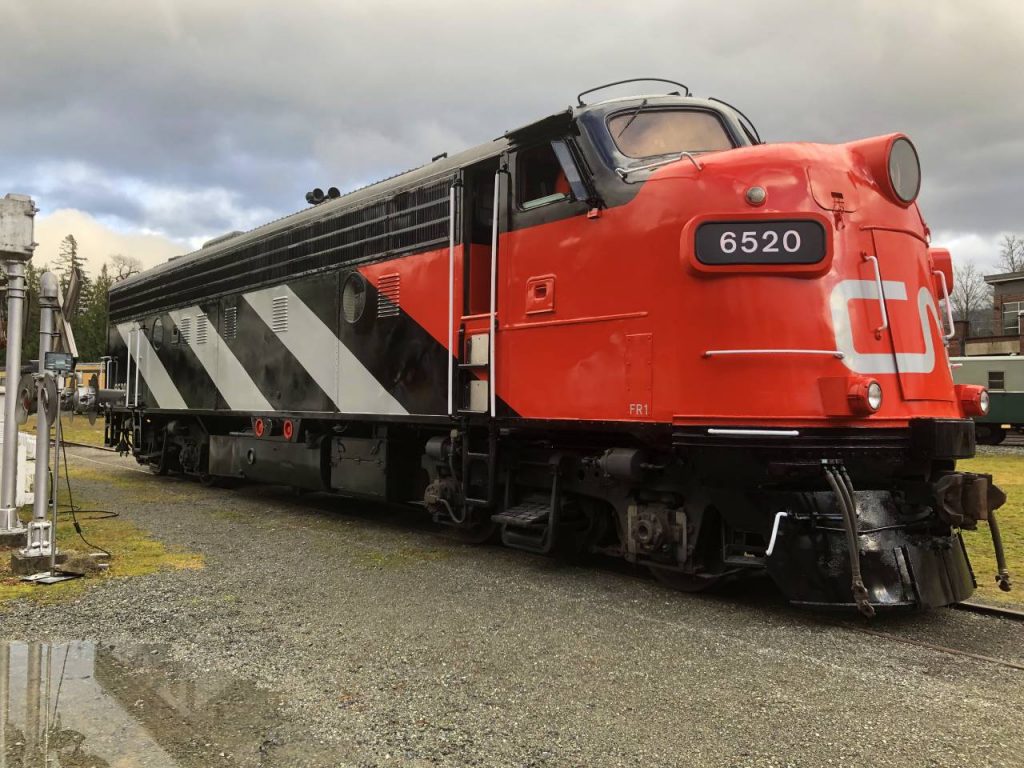 Recently repainted in the bold and striking 1961 CN scheme that it would wear for most of its career in passenger service, CN 6520 was revealed to the public in Squamish in November 2019, after several years of restoration and upgrades. Geared for a top speed of 89mph, CN 6520 was used to pull the finest regional and transcontinental trains of its time. It finished its career painted in VIA colours until it served again in CN Green and Gold in Ontario at the Waterloo & St. Jacobs Railway. It runs very well and will be one of our prime pieces of motive power for Dinner Trains and other special events. 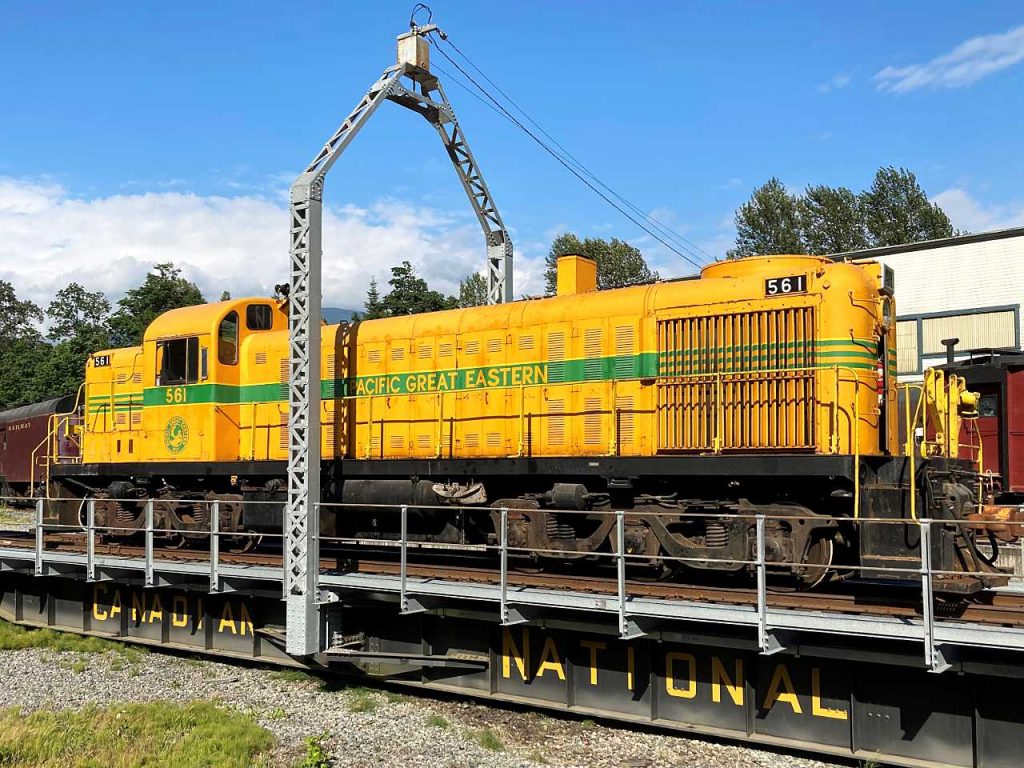 Pacific Great Eastern 561 was built in 1951 by Montreal Locomotive Works. Putting out 1600 hp, the RS-3 is a freight workhorse, and is frequently seen in service at the park, switching trains in and out of the round house and turntable.

Built by Baldwin Locomotive Works in Philadelphia, PA., in February 1910, this locomotive is a ‘Prairie’ type weighing over 90 tons in working trim and delivering about 22,000 lbs of tractive effort with a boiler pressure of 185 lbs. The cylinders are 16” x 24” and the engine is equipped with Stephenson valve gear.

These cars were built as standard US Army Troop sleepers by the Pullman Company in 1944, during World War II, to alleviate the shortage of sleeping cars used to transport troops in the US. The two cars in the RMBC collection saw service on the Alaska railroad during the latter days of WW II, then declared surplus in 1949.

They were built with ‘Allied Full Cushion’ high speed trucks, and were designed to be converted into baggage cars, thus ensuring a ready sale once the war was over.

Check out our Rail Diesel cars! BC-21 is one of two operational units at our museum. BC-33 is the other. This unit is an RDC-1 configuration model.

One of the feature attractions at the Museum, BC-21 sees regular service throughout  operating days, running visitors from Squamish Station to the MP2 Shops and back. Come for a ride with us! The ‘Alberta’ was constructed in 1929 as a Business Car for the use of travelling railway executives and their staff, serving as an office, home and entertainment centre. National Steel car built the carbody of ‘Alberta’ and CPR completed the interior finishing at Angus Shops in Montreal. The ‘Alberta’ is a group of 10 cars built for divisional superintendents, each named after Canadian provinces.

When built in July of 1929, the ‘Alberta’ had many smaller rooms to accommodate the various needs of the executives. Similar to the ‘British Columbia’, this car has a varnished mahogany interior and many brass fittings. After retirement in 1970, modifications were done to make the car suitable for use as a restaurant. Bedroom partition walls were removed and the galley enlarged. In this current configuration, the car has a lounge with an open observation platform, a large dining area and galley. Fortunately the general ambience of the car’s interior has been preserved. The Colonist car was built in 1905 and is one of a very few Colonist sleeper cars still around today. They were built to carry settlers, mostly European, to settle in Western Canada. The last mainline services these cars saw was carrying troops during WW2.

The cars were very uncomfortable and were often overcrowded. People often had to sit on the floor or stand. The passengers would spend 4 to 5 days in the car travelling across Canada. 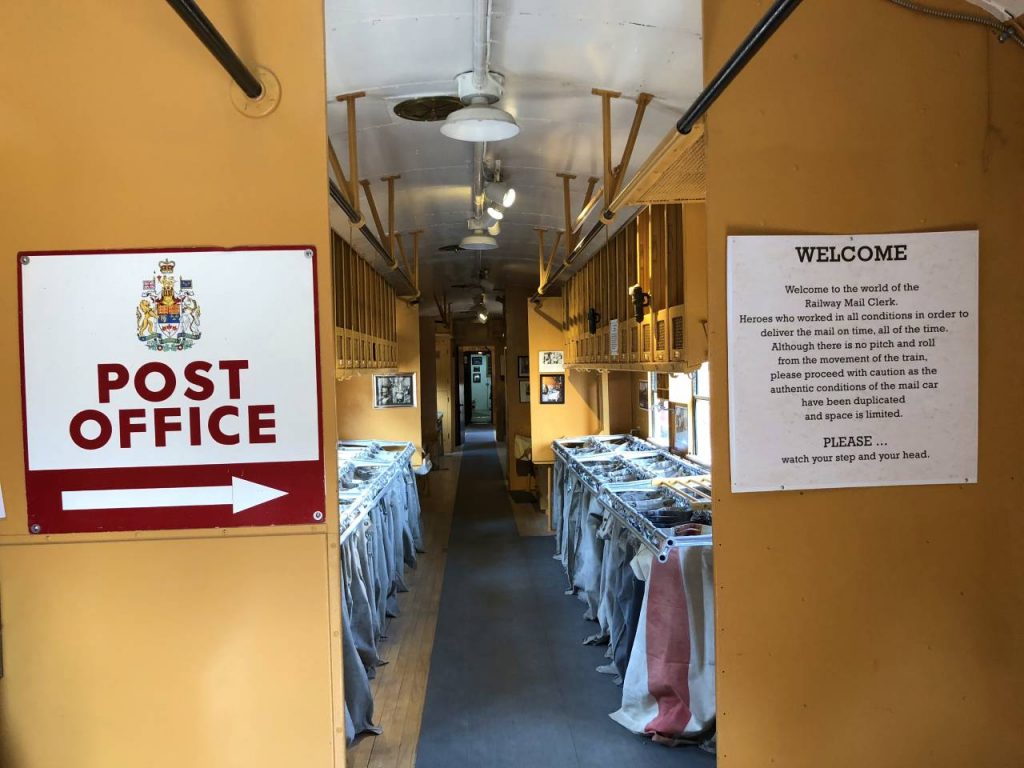 Built in 1949, it has a 50’ baggage compartment and a 30’ mail compartment. BC Rail bought the car from CPR for work train service but never converted it. In 1998 the WCRA acquired the car for preservation. It has been restored by a team of Canada Post volunteers and now represents a typical working mail car. No. 3704 was part of a group of 10 cars rebuilt from standard Baggage mail cars in the 3600 series. 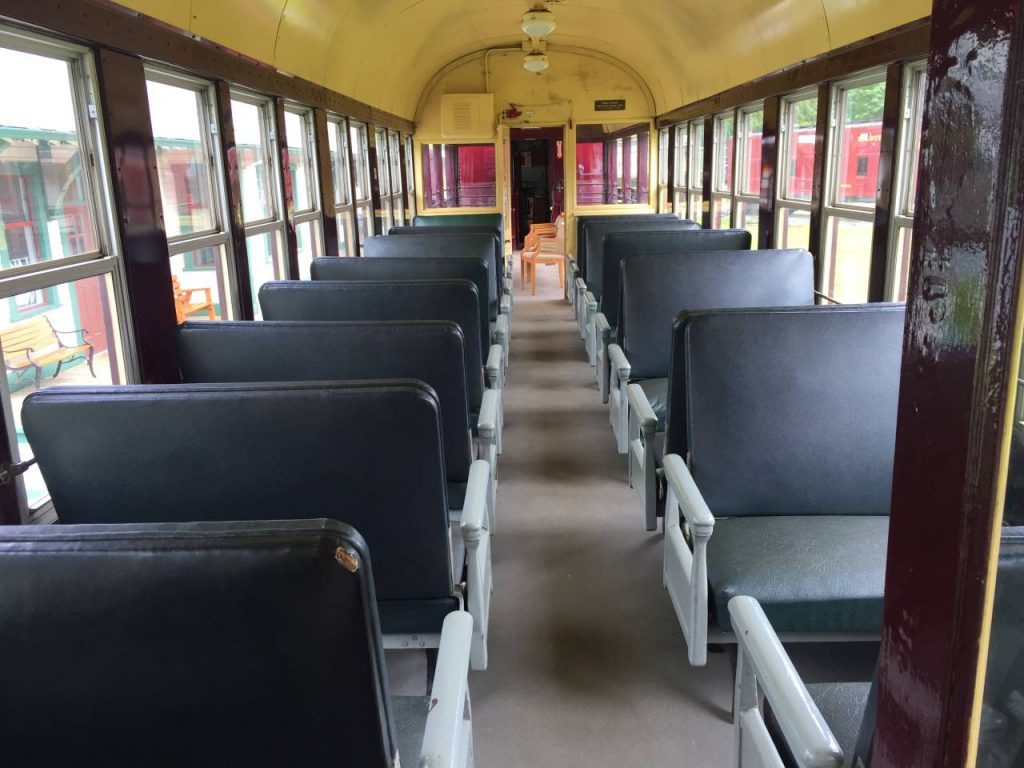 The Henry Pickering has been riding the rail for over 100 years! Built in 1914 as part of the first order of all steel coaches for the Canadian Pacific Railway, this car was in continuous service until retired in 1955. It was rebuilt from coach No. 1422 to Open Observation car No. 598 in 1956 and used on the ‘Mountaineer’ train that ran from Vancouver to St. Paul, Minnesota. WCRA acquired the car in 1964. In 1974 the car was leased by the BC Government to be part of the Royal Hudson train. It was named Mt. Garibaldi and operated until the mid 1980’s, and again in 2000 – 2001. Extensive restoration was completed in 2003. Renamed Henry Pickering, it has operated with the Rocky Mountaineer since 2004. 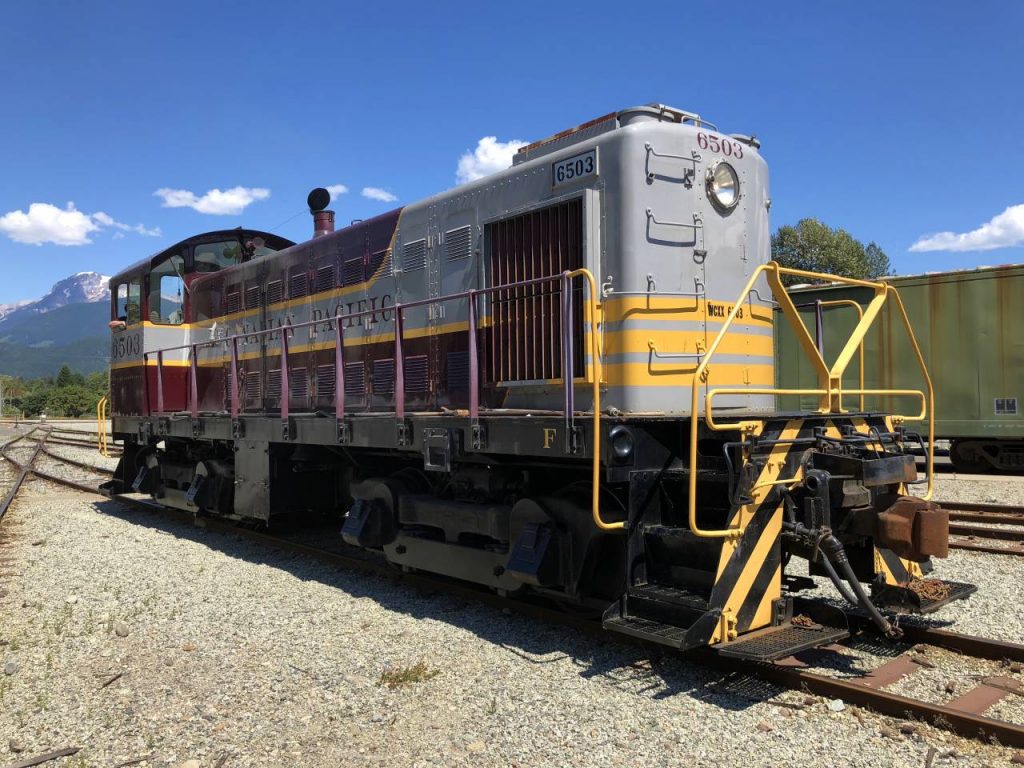 Our S3 was one of the first bought by Canadian Pacific to test the value of the 660 hp non-turbocharged switcher. No. 6503 was originally assigned to Winnipeg and proved to be sturdy and reliable. The engine has been modified with a buffer plate on the ends, over the coupler, in order to handle passenger cars. This locomotive served the CPR in various locations across Canada until 1983. The unit then sold to United Grain Growers terminals in Vancouver, switching grain cars until it was retired in 1987 and acquired by the WCRA. No. 65940 is designated the ‘Shovel Operator’s Bunk’. Along with another Bunk car, No. 71089, it formed the support cars for our Ohio Crane No. 2055. The car is much as it would have been in its Canadian National Railway working life. It provided a comfortable home and office for the Engineer while he was in charge of construction jobs out on the rail line. 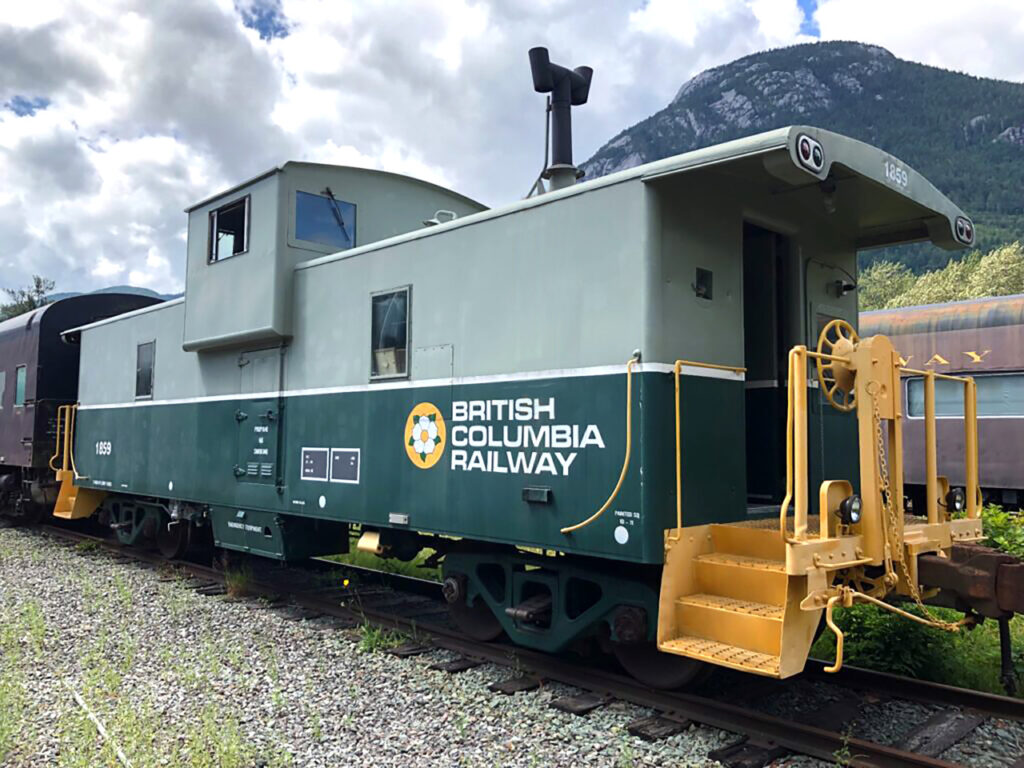 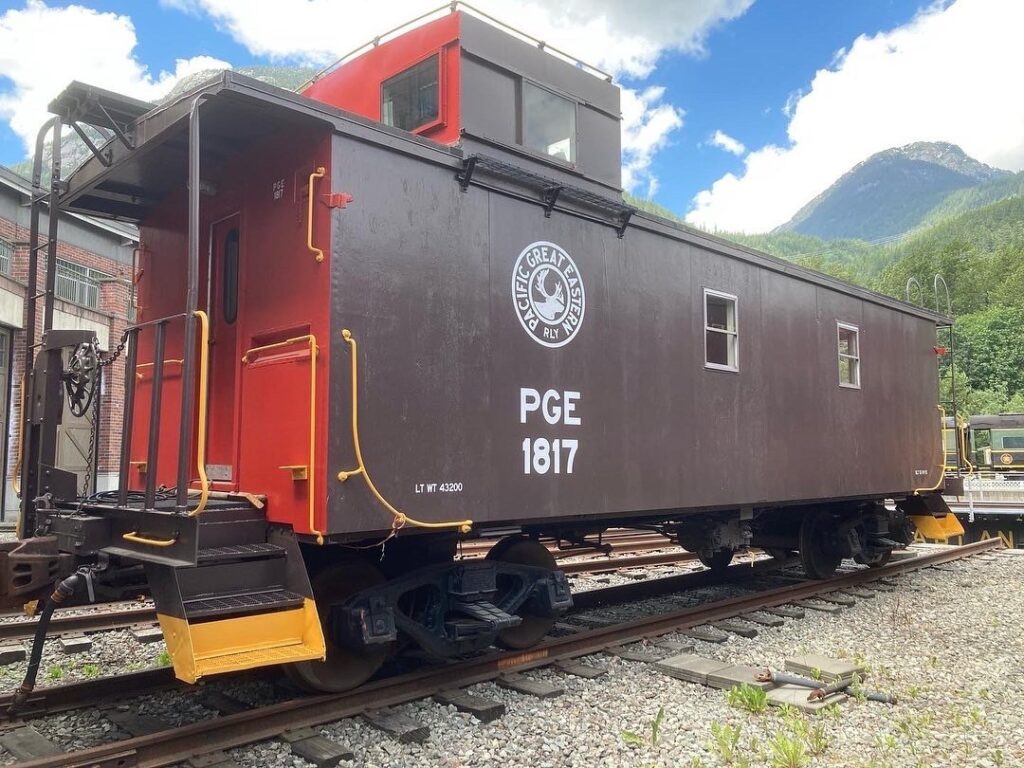 In 1955, No. 1817 was rebuilt from PGE stock car No. 503 in the PGE car shop. Eventually, thirty cabooses were built, numbered from 1811 to 1840. In their conversion, they were stripped to the frame and rebuilt using conventional methods. They were sheathed inside and out using marine plywood. The cupolas were constructed of sheet metal and welded for extra strength. They were warm and comfortable, equipped with a standard caboose cook stove and 3 bunks for crew.